How to deploy Nextcloud on Hidora: Dropbox open-source alternative

As a developer, I am fond of open source solutions. Today I would like to share with you one of my favourite – Nextcloud which is very popular among our clients.

Nextcloud allows you to deploy file share and communication platform on your own server or on the infrastructure of hosting provider you trust. It includes tools for synchronizing contacts, calendar, to-do lists between various devices, as well as voice and video calls.

Primarily, Nextcloud is an alternative to Dropbox on your own server. But in contrast to Dropbox, it is an open source project. Being able to look inside the code gives you confidence in what the software does and that it does not spy on you. 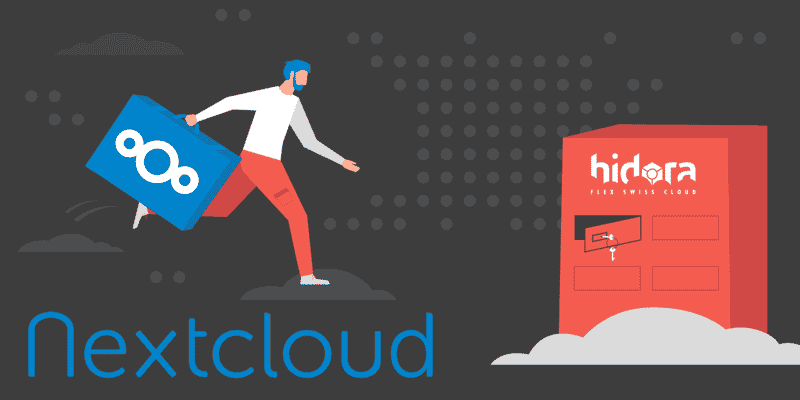 Why Nextcloud is so popular?

In today’s world, where all the big companies like Facebook, Google, Microsoft gather a lot of information about each user it is difficult to be sure who has access to your information.

The main advantage that Nextcloud gives you is a high level of security and protection of your business from mass surveillance. Nextcloud ensures that you know where the data is stored, and who has access to it.

Nextcloud can be run on most LAMP (Linux, Apache, MySQL, PHP), meaning that you will be able to host Nextcloud on your server. Nextcloud allows you to completely abandon cloud solutions like Dropbox and iCloud.

And most importantly, you know that your files are always available only to you. Nextcloud provides SSL / TLS, two-factor authentication and 256-bit AES. If you run Nextcloud using Hidora your data will be stored exclusively in Switzerland with no investments in hardware and software.

In case you have a big team (more than 20 people) it is cost effective to use Nextcloud compared to Dropbox, for example.

Nextcloud consists of plugins that allow developers to add functionality to the core product.

For instance, one of the most popular plugins is Nextcloud Talk that allows you to make secure audio and video calls, as well as exchange text messages via the web interface or the mobile application Nextcloud Talk.

One of the negative parts of Dropbox is the lack of end-to-end encryption. Meaning that it is not safe to store your non-public data.

For our clients, we only use secured solutions like a Nextcloud that provides end-to-end encryption.

Thanks to mobile and desktop clients you can access Nextcloud on all your devices (PC, laptop, tablet and smartphone). It is also available for all popular platforms: Windows, macOS, Linux, iOS, Android.

Nextcloud allows you to extend your storage as much as you need.

You can share files or entire folders with local users on one server (and control their permissions).

Using the client, you can synchronize local folders from the server. The client is freely available for Windows, Linux and Mac OSX. Mobile clients are available for Android, iOS and even BlackBerry (for a small fee).

How Nextcloud was created

Nextcloud logical continuation of ownCloud project. ownCloud was announced at the Camp KDE 2010 conference and launched as part of the KDE Social Desktop initiative.

The project was conceived as a free alternative of proprietary solutions, like Dropbox and Ubuntu One. The first stable version of the platform was released on June 24, 2010 – six months after the announcement of the project.

However, the business model chosen by the company, which assumed the presence of two versions of the platform – Community Edition and Enterprise Edition, was complicated.

As the main task of every business is to maximize profits, the commercial version of the Enterprise Edition platform required a lot of effort, causing a lack of attention to Community Edition.

The developers experienced severe discomfort because it was difficult to pay attention to one version without harming another.

And on June 2, 2016, the key project developers decided to fork their ownCloud with the aim of its alternative development.

The new project, named Nextcloud, has incorporated all the commercial functions previously available in its ownCloud Enterprise Edition.

Moreover, shortly after the fork, Nextcloud GmbH was created to provide commercial technical support to all those who use the platform in production or create their own products based on Nextcloud.

Thus, developers no longer have to break between the two versions of the platform, and the company’s current business model has become closer in spirit to the free software philosophy.

How to deploy Nextcloud on Hidora

On Hidora you can install Nextcloud automatically.

Wait for several minutes until your environment is created. After that, you will get an email with the credentials.

Deploying NextCloud on Hidora you get secure and scalable storage of your data on the territory of Switzerland with zero investments in infrastructure.

Also, Hidora has a 60+ built-in catalogue of free popular applications. Check it out at https://app.hidora.com.

Jean-Luc is a Junior Full-Stack Tech Engineer at Hidora with a strong IT background. He is consulting clients about DevOps and also helping Hidora’s customers to make automation deployments and migrate their environments.