If earlier it was normal to develop a product for several years, now the MVP needs to be released in a couple of months. In such conditions, the microservice architecture outperforms the monolith.

To begin with, let’s understand the difference between microservices and a monolith. 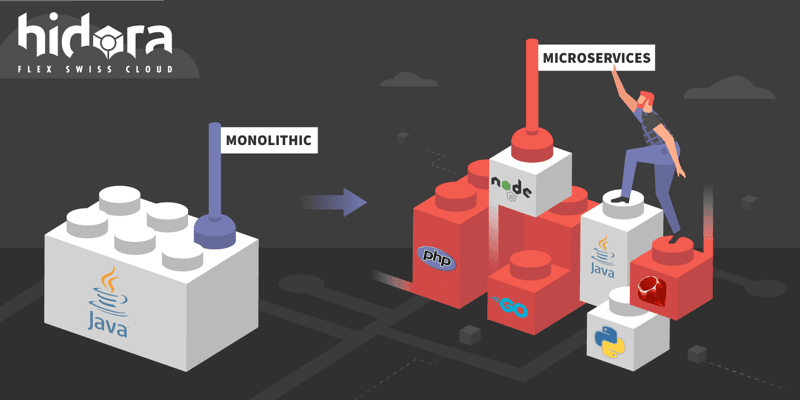 Microservice is an application consisting of independent services that can work independently, and scale freely on different servers. Microservice architecture is better organized than monolithic, since each microservice has a specific task.

The main advantage of microservices is an easy reconfiguration for various purposes. In addition, they are characterized by rapid deployment, fault tolerance, horizontal scaling, low barrier to entry and ease of management.

Imagine a smart home where all components can be controlled using the remote control: open windows, turn on the TV or even close the curtains. This is how microservice architecture works.

The second type of architecture is monolithic architecture. Monolith means that the components of a product are interconnected and interdependent, and linked in a form of a single application. If one of the components stops working, all the system will go down.

Imagine a layered chocolate cake. Each new layer makes the cake even tastier, but you cannot add a strawberry layer to the middle without changing the taste and texture of the cake. We can assume that the cake has a monolithic architecture.

Almost every successful product comes to a state where adding new features to an existing code becomes so difficult that the cost of new functionality exceeds all possible benefits from its use. In this situation, you should think about microservices.

The advantages of microservices look quite sufficient that they convinced enterprise developers such as Amazon, Netflix, Ebay to start using this approach. Unlike monolithic architectural applications, microservices have the following advantages:

If you want to use microservices you should understand that this approach requires additional knowledge in such technologies like Docker for components’ isolation, Kubernetes for management and Consul for service discovery. It can be a long journey, but you don’t have to do it alone.

Hidora team can help you with migration from monolith to microservices, offering architecture advisory, mentoring and migration services of seasoned professionals in all emerging technologies.

Jean-Luc is a Junior Full-Stack Tech Engineer at Hidora with a strong IT background. He is consulting clients about DevOps and also helping Hidora’s customers to make automation deployments and migrate their environments.

How does PaaS work? 3 main advantages of using PaaS
LiteSpeed: a magic pill for your website speed improvement